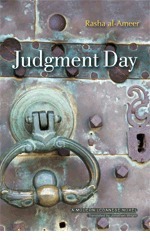 His humdrum life changes when an educated and independent woman recruits him as consultant for a book on the great tenth-century Arab poet al- Mutanabbi. As their work together on his poetry leads to friendship and then love, the imam becomes embroiled in ideological conflict with activist Islamists at his mosque. Taken into protective custody after his enemies declare him apostate, and separated from the woman he loves, the imam chronicles how their relationship opened his eyes to a new world and taught him to overcome his old inhibitions.

Judgment Day touches on debates within contemporary Islam and on the transformative and humanizing power of love between men and women.Judgment Day was first published in Arabic in 2002 as Yawm el Din and has gone through six editions: three in Lebanon, two in Algeria, and one in Egypt. A French version, translated by Youssef Seddik, was published by Actes Sud Sindbad in 2009.Rasha al Ameer is a Lebanese publisher, cultural critic, and author of two novels.

She began writing while a student in Paris, with articles in the Arabic-language magazines An-Nahar al Arabi wal Douwali and Al Watan al Arabi. On her return to Lebanon she co-founded the avant-garde publishing house, Dar al Jadid, which has published works by former Iranian President Sayyed Mohammad Khatami and the late Palestinian poet Mahmoud Darwish.

Her devotion to the classical Arabic language is apparent throughout her writings.Jonathan Wright is the translator of Khaled Al Khamissi’s Taxi and Alaa Al Aswany’s On the State of Egypt (AUC Press, 2011).