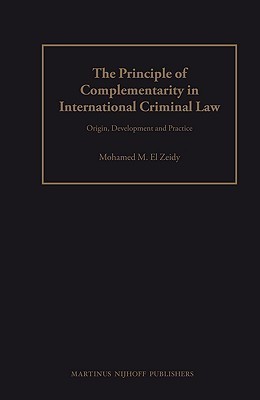 The study draws upon the first efforts at international prosecution, after the First World War, and then traces the evolution of the concept through the drafting of the 1937 treaty on terrorism, and the post-Second World War tribunals. It examines in an exhaustive manner the work of the International Law Commission that led to the drafting of the Rome Statute of the International Criminal Court, up to the deposit of the draft statute with the UN General Assembly in 1994. It considers the travaux preparatoires of the Rome Statute itself, in a most thorough manner. It also examines the post-Rome developments, particularly the original interpretations of the relevant provisions of the Statute by both the Office of the Prosecutor and the Pre-Trial Chambers.

This is a study that is of intrinsic historical interest, but also one that may help to guide interpreters of the Statute in the years to come. The concept of complementarity lies at the heart not only of the Rome Statute of the International Criminal Court, it is in many respects the underlying paradigm of international criminal justice as a whole. In this important study, Mohamed El Zeidy has drawn on historical sources, tracing the evolution of the concept and then showing how it has become operationalised in the first cases before the International CriminalCourt.

This book belongs in the library of every international criminal lawyer. Prof. William A. Schabas, OC MRIA National University of Ireland, Galway.

Comments
Comments for "The Principle of Complementarity in International Criminal Law: Origin, Development and Practice":