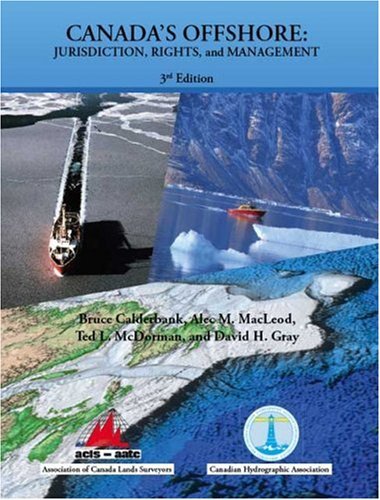 Produced by the Association of Canada Lands Surveyors (ACLS) and the Canadian Hydrographic Association (CHA), it will be a useful reference for years to come.This book covers the following:- International practices, customs, laws, and treaties concerning the oceans, and their effects on Canada.-Canadas responses to international ocean-related events through Canadian legislation, regulations and practices.-International treaties and conventions, Canadian court decisions, and the result of arbitration decisions concerning Canada, with specific emphasis on the resulting ocean boundary delimitations.-The mechanics of describing and determining ocean boundaries, and interpreting ocean-related Canadian legislation.-Practical issues related to Canadas offshore oil and gas industry.If you have a question about Canadas offshore, or about international or Canadian laws and legislation concerning the offshore, then you should start your search here.

If this book does not contain the full answer you seek, then it will direct you to other relevant resources. Most importantly, this book supplies the context and relationships that are vital to getting the most out of this information.On 7 November 2003, Canada ratified the United Nations Convention on the Law of the Sea, 1982, which, among other things, established thebasis for national interests and sovereign rights beyond the traditional 3 nautical mile territorial sea.

Through the 1997 Oceans Act, Canada has also consolidated various pieces of legislation to provide a more cohesive statement on Canadas offshore interests, including the juridical continental shelf beyond the 200 nautical mile Exclusive Economic Zone. In the 2005 Canadas Oceans Action Plan, Canada has further identified issues such as sovereignty, integrated ocean management, and health of the oceans as priorities, and identified ocean science and technology as one of the tools to meet these priorities.When discussing Canadian issues, the material is organised from the Pacific Coast, to the Atlantic Coast and then to the Arctic Coast.

The book features over 64 colour figures explaining international law of the sea issues and Canadas offshore. Extensive footnotes have been included to provide references and further information. The Glossary and Appendices will further aid the reader. A detailed Bibliography is included.All of the Figures are available in colour via the ACLS web site http: //www.acls-aatc.ca